Patterns of genetic connectedness between modern and medieval Estonians and Finns

A new Estonian study sets the connection between our countries to the 8th and 10th centuries AD and bases it on an assumed Estonian migration to Finland.  Sounds like Estonian self-seeking idea about  Estonian Vikings.  Heard before.  I have not knowledge about such Estonian migration.

There have been a lot connections between our countries, but historians have never mentioned exactly aforementioned time frame as a significant event in our history.  Sure people have moved from Estonia to Finland, but also conversely.  Historians suggest that the main migration bringing the Baltic Finnic language happened during the Roman Iron Age and we know for sure that around 20-30% of the North Estonian population had Finnish origin after the Swedish era in the 17th century.  We know it because we have original documents.  Those times were very exhausting in Estonia due to many wars and the Estonian population size decreased remarkably.

Such a Late Iron Age migration from Estonia should also be seen by an elevated R1a proportion in Finland, but the small R1a amount in Finland doesn't imply any Estonian origin.  I stay waiting for wider scientific stance.

The grave of Viking female revealed many surprises

It was long assumed that the grave was made for a woman, for a Viking queen or princess. Archaeological evidences spoke about a female, clothes and jewellery were typical for a female, but the luxurious sword gave a hint about a male.  The sword was so fine and luxurious that it has been a model for replicas sold under the topic "Sword of Suontaka Viking princess".  But genetic analyses  revealed that the buried one was not a typical man or woman, the remains showed signs of both, namely a chromosomal XXY structure.

The dichotomy between Eurasian and African X chromosomal haplotypes

I made a statistics showing a full bifurcation between East-Asia and Africa. Showing high similarity in the whole Eurasia it is likely that the Eurasian haplotype is related to the OOA event. To see how much the African haplotype in Europe represents Near East migrations needs more investigation. The result implies however that not all and there have been different evolution and migration routes in Eurasia. The haplotype includes 15 SNPs.

I found newly some information about once lost Finnish study on the Eupedia forum, but still the source unknown.  If you know where is this data from, please inform me, I appreciate it.  I assume that the study can be published during this autumn, but can't be sure.   I suppose it has been on the agenda of the deleted symposium EAA2020.

This is interesting especially because of the certain illogicality between released yDna and autosomal data.

Southwest Finland has rich Late Iron Age archaeological records that show diverse cultural and trade networks. Ancient DNA analyses
from human remains, however, have remained scarce due to the acidic Finnish soil that leads to a rapid decay of bone material.
Two large inhumation burial grounds from the Crusade Period (1050–1150 CE) in Southwest Finland, Raisio Kansakoulunmäki and
Masku Humikkala, represent the transition period towards Christianity. The favourable skeletal preservation on these sites offers a
possibility to analyse the genetic structure of the Iron Age communities behind the burial context. Combining this genetic data to
other periodically and regionally close individuals enables an in-depth examination of the population history of Late Iron Age Southwest Finland.
In this archaeogenetic study we investigate the genetic composition of altogether 29 individuals, 14 from Kansakoulunmäki and
15 from Humikkala. A closer analysis of kinship patterns and genetic ancestry provides comprehensive information of the Late
Iron Age communities, such as family relations and patrilocality. All samples in this study have been processed in dedicated cleanroom facilities.
Ancient DNA libraries have been enriched for ancestry-informative markers in human DNA, and the data retrieved
with high-throughput next-generation sequencing. The preliminary results for seven Raisio Kansakoulunmäki individuals indicate a
genetic continuity with contemporary Finnish populations. Our current analyses intend to provide a detailed view of the ancestry
components, kinship and genetic affinities for all successful samples.

Being active in the internet I often meet these ideas.  Russians often have opinion about eastern conquerors that populated Finland.  Westerners have another weird habit; they dig again and again 80 - 150 years old dusty papers to prove something.  We have in Finland our own stories, sometimes supported by our researchers, unfortunately.  Common for those people is denialism, they don't want to use up-to-date and comparable scientific  results and if they use available new data they will always find a loophole how to support those 80-150 years old dusty papers.  One of those ideas is to prove that the Finns came from the far east and so East Finnish people have to be an evidence because they are the most eastern Finnish group..

I made a series of Dstat-statistics to see where the East Finns locate on the east-west axis.  I have genealogically proven samples from all Finnish regions and also  classified samples from the 1000 genomes project.

East Finns are closer Southwest Finns than they are from Karelians, despite of the historical Swedish connection of Southwestern Finns.

I made more comparisons to see a bigger view and I can cast a challenge.  If someone can give any non-Finnish sample group being closer East Finns than East Finns are from Southwest Finns, I will publish the results and give all kudos to her/him.  Only group on the Russian side I rule out is Ingrians who actually are East Finns who migrated to Russia during the historic era.

FIN-Southwest-proved is from the seaside of Finland Proper and consists of 5 samples. 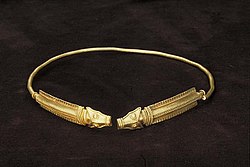 It was found 1770 from Nousiainen in Southwestern Finland and soon after the discovery moved to Stockholm.  Being from the 200 AD it is probably one the oldest artefact related to Scandinavian mythology.  Taking into account the age and representing the heathen time before Swedish crusades it is hard to see it as a Swedish era product.

I did a new test searching admixtures of Karelians.  Academic Karelians given by Russian researchers are likely from the White Sea region.  As far as I know they are relatives of Finnish Karelians, but still a different group.  In Finland only people living in the Karelian Isthmus were considered as original Karelians, but probably in Russia the Karelian ethnicity is a wider concept and those figured as more southern Finnic people are called Ingrians, while in Finland they are called Izhorians.  For better or worse, the Karelians published by Russian researchers are not easy to determine by any Finnish ancestry, neither those called Ingrians by Russian researchers are what they should be (in my opinion).  The Ingrians as understood in Finland were an eastern migration of East Finns in the 17th century while Izhorians are considered as an old Baltic Finnic group.  What we see later, the published Karelians seems to be quite an archaic group and the best but not qualitatively confirmed match for them was Baltic_BA (Baltic Bronze Age) plus even older Bolshoy Olegi Ostrov samples from the Kola Peninsula, both samples not belonging to any known Finno-Ugric speaking people.  The  published Ingrians seem to be a very Finnish group, which is reasonable, but being closer Southwest Finns than East Finns I would say that they actually are Izhorians.  After this prologue I want also say that I probably will not do more these Finnish analyses, not before Finnish researchers publish new Iron Age Finnish samples. They published some data of them already two years ago, plus I found accidentally a newer international study citation and results figuring Iron Age Finnish samples showing unprecedented results.  I linked this study in my older letter, but the study disappeared later, so I can't tell if it was anything noteworthy or only a misconception, which was later removed (link: http://terheninenmaa.blogspot.com/2020/09/study-southwestern-finnish-samples-from.html?m=1 ).

Best f3-results.  It seems like Karelians, Tavastians and East Finns compose a partly mixed entity, while Southwestern Finns belong to another entity.