Who were east Vikings?

East Vikings had influence over wide areas in Baltic and pre-Russian regions.  They had permanent strongholds in the area of present day Latvia and on the shores of Ladogan (Staraya Ladoga).   Their east ways went through the Bay of Finland and Daugava river in Latvia, which was known earlier as Livonia (known also Dvina river and in Baltic Finnish languages Väinä-joki).  Russian chronicles mention them as founders of the earliest Russian state.  Some sources connect them to the Byzantine guard known as Varangians, but this information is contradictory.  Anyway, it is shown that ancient military and traders from Scandinavia used to make long trips in a wide eastern area.

During those days it was difficult to make difference between aims of Viking trips.  They can have been travellers, raiders, traders or even new settlers, or everything this at the same time.  But who were they?  New ancient samples give some answers.  Almost 500 Viking era samples were publishes a few years ago.  Were the a homogeneous group?  Were they like present-day Scandinavians?  My answer is yes, but also no, if we look at genetic picture of all southern Viking Age Swedes.

I made qpDstat tests for samples classified as Vikings,  gathered from Sweden and the Baltic area. Mostly they were similar to present-day Scandinavians, but there are also exceptions. I found that samples from Sweden Upsala, Sweden Sigtuna and Gotland were exceptions.  Those three had influence from the eastern seaside of the Baltic Sea.  On the other hand samples from the Ladogan region and Viking remains found from Saaremaa (in western Estonia) were unambiguously of Scandinavian origin.  My conclusion is that Upsala, Sigtuna and Gotland were international trading centres, while eastern travellers were typical Scandinavians and probably from the Southern Scandinavia.  The heartland of Viking raiders was in Southern Scandinavia. 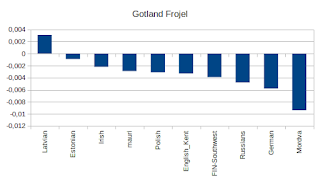 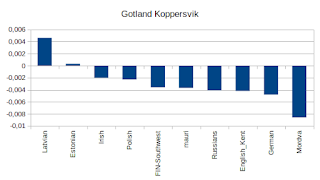 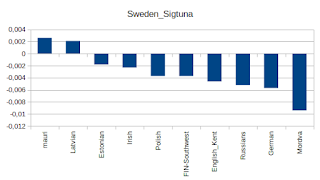 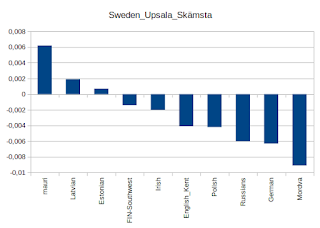 Mauri is me.  I have now a sample set fitting with the Human Origins data set and I can do high quality tests with it.

I have never told here my blog who I am.  First, I have a genealogy research based on church and admisistrative documents reaching all my ancestrors to the end of the 17th century and certain Finnish male lineages to the beginning of the 16th century.  99% of my earliest lineages carry Finnish names and were settlers from Tavastia to the seaside of the Bothnian Bay. They supposedly moved from tavastia 500-700 ybp.   During the heyday of the Swedish realm, in the 17th century I have some foreign lineages from Baltic countries, Germany and Scotland covering around 3% of my ancestry.  From the end of the 18th century my ancestry is again fully Finnish by name, as well as proven by church registers.  All this is essential to know before estimating my genetic ancestry.  During years I have tested myself on online genetic tests, not only one or two, but maybe tens and I have a good general view about methods and about results I get averagely. Nowadays tests and the research behind them have improved, mostly the improvement is due to the growing amount of reference samples.  In a few years the reference sample size is multiplied.  However used methods can mislead.  Basically methods can be divided into two categories: tests trying to find a prevalent ancestry using genetic fingerprints characteristic for each populations.  This method is useful in a worldwide genealogical research, giving a good estimate where your ancestor comes from.  Another way to estimate someone's ancestry is an orthodox admixture method using reference groups.  The biggest problem in this method is how to select reference groups.  Missed or wrong reference groups give false admixtures, because you can practically choose any two or more points on the genetic geography to determine one's  admixtures.  So be cautious!  Nevetheless, real (orthodox) admixture test with wide genome sample can reveal real things with better certainty than the method searching only prevalent ancestry, simply because you typically don't know the used method and how your prevalent ancestry is found and if there are minor admixtures.  Both methods can be misleading, but in the case of real admixture you can evaluate things being wrong and right, in the case of prevalent ancestry method you have not data and tools to judge the result.

My first result show that I am Finnish and this data could be published without further information.  In this case it tells that my admixture looks MOSTLY like an average Finnish admixture, but some tests could find my Finnish origin by certain genetic fingerprints, which is totally a different case.  Showing typical Finnish admixture doesn't tell that the Finns ARE a mixed population, only that it can be in some time frame. 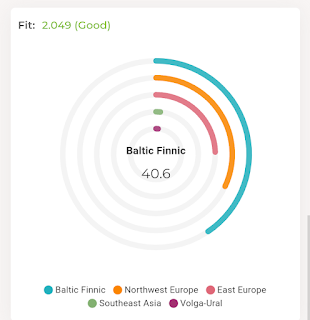 Following results show that I am according these tests, as well the Finns averagely, mixed, but there is a probability that the Finnish reference (possible also others references) is poorly selected.  Changing relative position on the genetic geography I could be fully Finnish and the chosen Finnish reference mildly mixed in some other way. 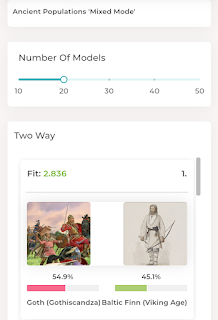 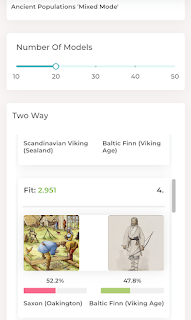 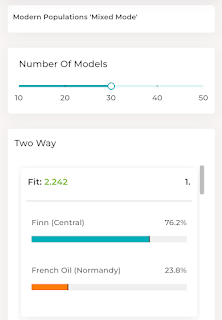 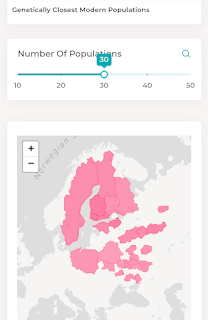 This study claims that Finnish researchers have probably found a hunter-gatheter population that lived only 400 years ago on the  northern seaside of the Baltic Sea.  Maybe they found the first evidence of a Paleo Diet eater.  In the future this kind of random evidences are growing in human remains found on southern seasides in Finland, proving possibly of living hunter-gatherer population that lived there around 2000 AD.

East Hunter-Gatherer ancestry breaks common logic.  While it was in Europe highest in ancient Steppe population, Yamnaya and Afanasievo and next highest in Cored Ware populations, it seems to fade out in modern Baltic populations, although those modern populations have highest Steppe ancestry.  Instead of East HG the Balts have highest West HG among all European populations.  This made me wonder whether the Dstat, and other tests basing on genetic drift, works correctly.   I made a Dstat-run

and the results is

To see if there is shift between East and West Hunter-Gatherer drifts I made another test using 3Pop-test, which is rather a test of common ancestries than a comparison.  It supports Dstat and shows that the East HG is dominant only in ancient Steppe populations.  We can see minor shift though.  For example FIN-West shows higher West HG than expected by Dstat.  Looking at the time span from the Baltic Corded Ware to the Baltic Bronze Age there is a huge shift from EHG to WHG.

I got an idea to extract heterozygotes from the source population data to see recent admixtures without interference of homozygous inheritance.  The goal was to remove local genetic drift and see the recent admixture between population pairs.  Several studies have shown that heterozygotes imply recent admixture.  It is easy to see that mixing of two or more populations lead to increasing heterozygosity, even homozygous and drifted populations create heterozygosity in mixing process.  I removed all homozygotes only from source populations, leaving other populations original to give a chance to homozygous mixtures to lead to heterozygous offsprings.  Test samples are  from 1000 Genomes- and SGDP-projects modified to fit to the HO-data space published by Reich Lab and in the final stage pruned to include 180000 heterozygous locations, which are then compared to unpruned samples (it is essential to standardize samples in using Admixtools/qp-softwares).  Outside listed result I tested also Basque samples.  Basque results showed only distant admixture and surprisingly (at least to me) the closest admixture was with British samples, not with IBS and French samples. Again I noticed that Swedish SGDP-samples are useless, which annoy me especially because Sweden belongs to root populations around the Baltic Sea. I would be grateful if someone of my readers has an idea where to download decent Swedish samples fitting with the Human Origin project.  I need the HO-space or more to get reasonable amount of heterozygotes.

Mauri11m is me and I was born on the western seaside.

These tests lack of many populations, are not perfect and can only prove the applicability of this method reducing the impact of local genetic drifts.

What I have seen we have no standards in reporting ancient admixtures of recent populations. Commercial services give sometimes 70% Western Hunter Gatherer, sometimes 15%.  Methods are poorly described, if at all.  Obviously there are admixture overlaps and the results depend on how admixture tools identify them.  For instance Yamnaya Samara overlaps with several hunter gatherer groups.  I am sure that also European early farmers (LBK_EN) overlap with later Near East admixture in Europe and later Near Eastern admixture exists in Mediterranean.  In other words admixture runs without Near Eastern samples assume EEF, but it doesn't give best fit.  My test uses following qpAdm files:

The results looks reasonable and qpAdm gave positive best coefficients without errors with only one exception, Swedes.  I don't know why modern Swedes failed, because ancient Gotlanders made a perfect fit.

Here the link of preprint.  It looks like an arrival of a new male group from Estonia representing Baltic Finns mixed with older more Swedish-like population.  Obviously those western females represented older local population, which at the end of the Viking Era became isolated from Sweden.  Hard to believe that Swedish females migrated to Finland without men.