The distribution between lines U and H in Finland has been a point of discussion now.  Many thinkers have underlined that in a big view H is connected to Neolithic farmers and U to Mesolithic hunter gatherers.  Although it is interesting to combine different point of views, sometimes people forget the context and tend to overreact, as in this case has happened too.   Overall the transition to farming happened in Southern Europe around 7000-5000 BCE and in Northern Europe 3000-2000 BCE.  In light of this history all settlements in Finland are extremely young and in Southern Finland differences between female and male haplogroups manifest more migration routes from different compass points and different farmer populations, rather than introduction of Finnish agriculture.  Although I don't believe that this fact is totally missed, wrong highlighting can't be any good. Populations and migrations varied depending on time, during the latest 2000 years especially in the East Europe.   In my opinion in this point researchers have lost the substance, which would hold a question "where did they come and why so much later than in most other places in Europe".  The answer is to be discovered by comparing female and male haplogroups and types in Finland and in possible contact areas.
Posted by Mauri at 4:15 PM No comments:

A new study has been published, Human mitochondrial DNA lineages in Iron-Age Fennoscandia suggest incipient admixture and eastern introduction of farming-related maternal ancestry .  It includes several new samples from Iron Age Finland and also historical Finnish samples for a comparison purpose.   Some of these mitochondrial samples are far too rare to reveal statistically anything, some are too common.   Best we can do is to try to find results implying something regional and I try to find them and compare them to present-day samples gathered from FamilyTreeDna's projects.   Unfortunately those projects are biased to West Europe due to the testing activity, yet we can see distribution patterns inside Fennoscandinavia, because Finland is one of the best tested country.   I am not going to make conclusions, because I don't see any sense to try to connect only 1000 years old Finnish samples to any European wide prehistoric events, I just show results.  When I have more time I will gather more results, if it sounds reasonable in a Fennoscandinavian regional context. You can do your comparisons and send here as comments.   Image cropping follows the distribution, nothing exists outside images. 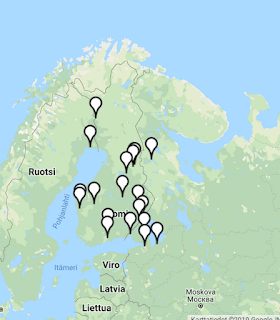 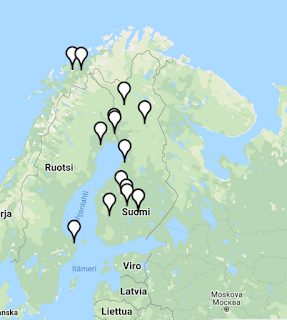 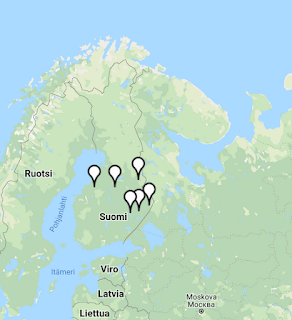 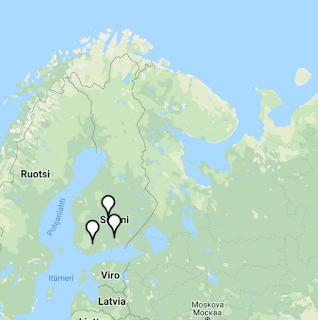 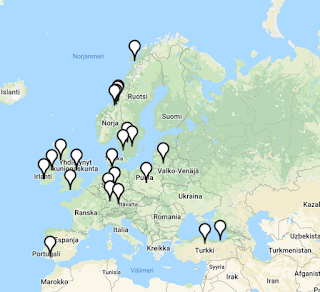 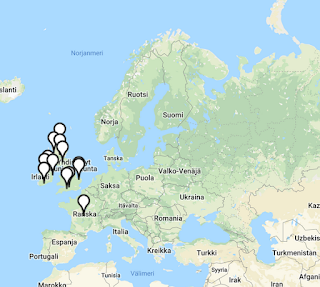 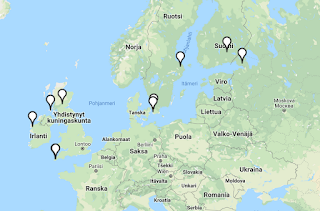 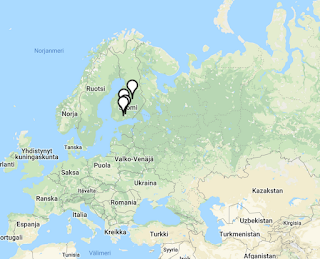 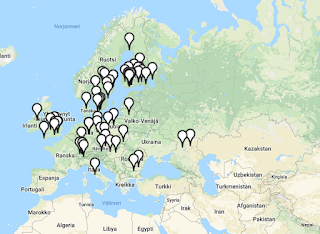 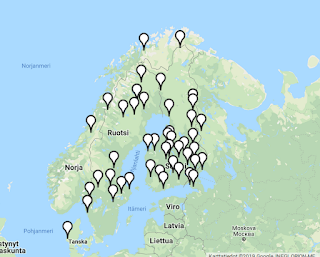 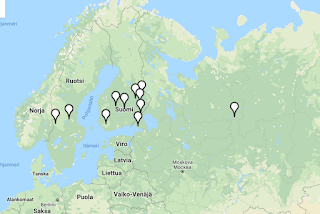 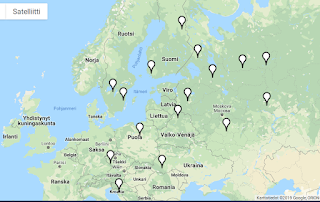 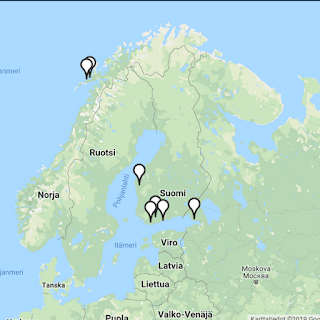 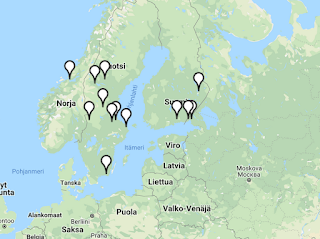 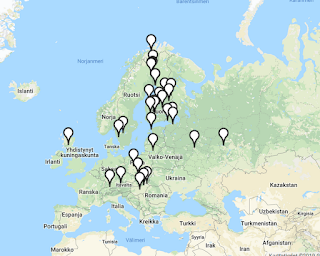 Behind most studies and also behind yDna haplotree nomenclatures is a lot of brain work.  Just reading and picking scientific vocabulary doesn't make you an expert, you have to experience things.  See differences and similarities, question your own thoughts more than thoughts of other people and question enough to reach consistent structures. These comments are not addressed to anyone particularly, but something I have seen has to be commented.

I promised to go on with my yDna tests and add also "negative calls", i.e. ancestral SNPs.  I have retested Stora Förvar 11, a sample from Gotland dated 7300-6800 BC and detected by me and another blogger as I1 . Before new results some background.  If we look at the ISOGG 2019 nomenclature we see a significant difference between branches I1 and I2.  There are 205 found positive calls under the classification I1, but only 22 under I2.  I counted now only calls under titles I1 and I2, not any downstream mutations.  This means that the time span in case of the title I1 is bigger and it also means that there is a lot of unknown history behind the I1 story.  So when we say "it is only a title I1" we actually should say "it is I1 and many still unknown downstream mutations", almost 10 times more time and unknown downstream mutations than in case of I2.  We don't know much about the prehistory of I1 until we have dated information of its "positive calls".

There were "positive calls" / derived values for Stora Forvar 11:


and there are "negative calls" / ancestral values:


We can say that Stora Förvar 11 belongs to the I1 branch and if we could infer the age he could be located around to the middle of the time span of the title level of I1 (11 derived and  10 ancestral SNPs).  All ISOGG locations above I1 in I branch were derived and all below I1 were ancestral.

Thoughts about the origin of Finnish and Estonian languages

This is probably not a popular writing, but I am not a politician and I don't need to please anyone.  Here is the issue:  why the yDna distribution among ancestors of the earliest Finnic people doesn't correspond to their imagined yDna?  Linguists are cosily unanimous that the home of Baltic Finnic languages was in Southern Estonia around 3000 years ago.  One but not the only reason for this has been the presence of Baltic loan words in Baltic Finnic languages, including Finnish.  Numerous studies endorse this idea.  Baltic loan words wouldn't have been possible without straight connection with Baltic speakers. But then, why this theory is not supported by genetics?  It is a common idea that the haplogroup N1c1 brought Finnic languages from the east to Estonia.  However, only a small minority of Late Bronze Age and Iron Age men in Estonia carried N1c1 and even less of them carried those clades nowadays especially connected to Baltic Finnic speakers.  Below statistics from Saag et al. 2019. 21 samples of all 28 ancient Estonians carried R1a and only 6 belonged to N1c1, one was J2b2.  Furthermore only one of those six belonged to a "Finnish haplotype" and other five most likely belonged to "Baltic haplotypes". 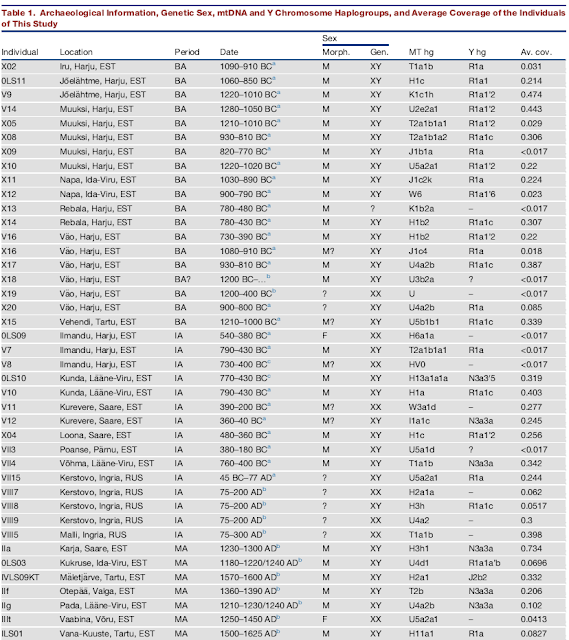