The study is dowloadable from the link in the end of the following text, link

Results figuring CAD are contradictory with another Finnish study.  This study (published in a Finnish medical magazin Duodecim by Joel Nuotio*, Tomi T. Laitinen* ja Markus Juonala, Link) gives following results, showing the highest vulnerability of CAD in East Finnish regions where the proportion of N1c1 is highest and the lowest vulnerability was found in Southwest regions where the N1c1 proportion is the second highest. 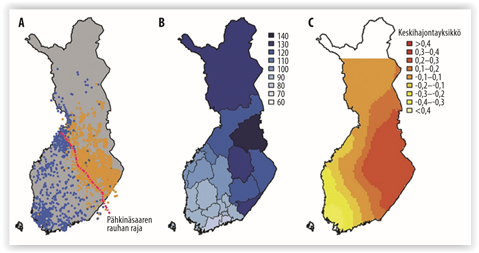 A - autosomal genetic structure in Finland

I see two main factors involved with the disease vulnerability

The Duodecim article shows the highest CAD incidence in the northeast and lowest in the southwest, both areas having the highest N1c1 proportions in Finland.  The way of life is today quite the same everywhere in Finland, thanks to the similar food markets and consistent culture  in the whole  country.  So what remains is differences in the autosomal inheritance.  Southwest and east have been isolated from each other hundreds years in the Finnish history and we can predict also significant difference in the autosomal inheritance of those two areas, the difference we can also see using autosomal genome tests.  Basically the areas of the HG I1 are between southwestern and eastern N1c1 areas and we can predict that the CAD vulnerability of I1 should be between the vulnerability of those two N1c1 areas.

English preferred, because readers are international.